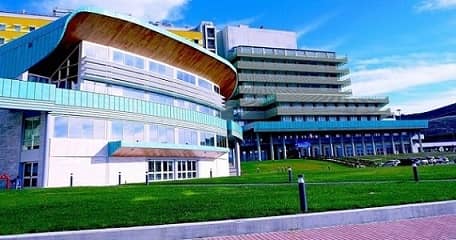 This is the capital of Calabria situated in a panoramic position and also known as the City of the three hills. Catanzaro rises on a rock and is split into two parts by the steep Fiumarella valley, the two sections being connected by a huge concrete steel bridge (the Viadotto Morandi), among the highest in Europe, built in 1960 on a design of architect Riccardo Morandi. The beach town Catanzaro Lido is located about 5 kilometers south. It has a large board walk, and a harbor for small fishing and pleasure boats. Called the city of the 3 V's from Vitaliano (the patron saint), velvets (it was a textile center since Norman times) and "venti" (=winds) for the breeze form the Sila mountains and the sea.

Its territory was inhabited since Palaeolithic times and during the Neolithic era (Triavonˆ settlements and including the area between Gagliano and the Corace Valley).

Some people connect the origins of the City to the Magno-Greek era by the hand of the Greek hero, Ulysses, who landed on the coasts of the Squillace Gulf and who was thought to have founded Skilletion. The centre survived until the VI century AD when, by the name of Scolacium, it was abandoned by its inhabitants.
An archaeological park, which preserves monuments from the Roman era and can be visited today, is all that remains of Scolacium.

Therefore, the origins of Catanzaro came about by the hands of the inhabitants of Scolacium, who, guided by two Byzantine leaders by the name of Cataro and Zaro, founded Catanzaro (12 April '793).

Further suggestions of the name state that it is of Greek Byzantine origins Katanz‡rion (kata=under and angar=terrace), with reference to the terraced vegetable gardens of Arabic Catanzaro which were found during the Byzantine reconquer era (X century).

The reality is that the Arabs, guided by Emiro Aba el Aabass, had already conquered a true and proper city during 903 and therefore, the origins of the name can be connected to a previous era. It is believed that the Arabs called it Qatansar.

To complete the uncertain picture with respect to the origins of its name, we can also refer to the thesis which suggests it derives from Katˆ (beyond) and Zaro (the ancient name of the Fiumarella). Therefore the City beyond the river.

Catanzaro was reconquered by the Byzantines during the X century and entered as part of Norman domination (1059), giving it a higher status of an Earldom of Robert Guiscard. The City grew due to its strategic importance. A Castle was built and it became an Episcopal seat (beginning of the XII century).
Under the Swabians it continued its enrichment process, but also thanks to the decision of Frederick II to include Catanzaro in the Royal Estate (around 1250). The Emperor granted the City to the Ruffo family, under whom it became the capital of a vast portion of territory and a powerful commercial centre, mainly thanks to silk manufacturing.

Under the Angioinians, it was declared a state city (1406), but shortly afterwards, during 1420, it returned to the Ruffo family, followed by Antonio Centelles, a Catalan man of fortune and conspirator against the Aragonese. Alfonso I of Aragona therefore intervened and ousted Centelles, returning freedom to the City.

A few years later, in the ambit of the Franco-Spanish War, due to the possession of Southern Italy, Catanzaro was besieged in vain by the French (May 28th - August 1528) and because of its heroism, merited the title of Magnifica et Fidelissima, which embellished the civic coat of arms of the Imperial eagle with the inscription of sanguinis effusione. It also obtained the concession of minting its own currency.

The XVII century brought economic decay, worsened by Plague events (1668) and seismic tremors which hurt and damaged the City. There was a terrible earthquake in 1638.

During 1734, Carlo III of Bourbon ascended to the throne and issued an administrative reform of fiefs. Catanzaro remained state property and during this period, trade flourished.
In 1783 a further earthquake brought the City to its knees.

Following this, Catanzaro adhered to the Republican ideals of 1799, but after only a few years, turned against the French (7th July 1806), who for this reason, always preferred Vibo Valentia.

A visit to the City

It is impossible to list the entire architectonic patrimony of Catanzaro linked to the list of places of interest mentioned below. We would like to point out the main places of interest beginning with the Duomo, which was rebuilt after the war, following the bombing of the City; the Immacolata Church and the Church of the Rosario with the adjacent Oratory.

Only parts of the wall from the Norman Castle and a tower remain standing.

The museum itinerary Catanzaro offers its visitors is important. It has a remarkable patrimony preserved in the Provincial Archaeological Museum.